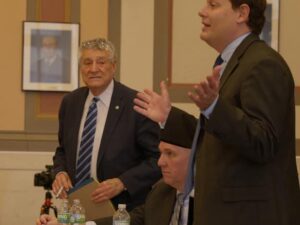 Our criminal defense team has begun the new year with huge success. Attorneys Martin Pinales, Eric Eckes, and Molly Tolbert teamed up with the Ohio Innocence Project to secure a new trial for an innocent man convicted of murder in 2010. Marcus Sapp has spent the last 13 years behind bars for a crime he did not commit, never giving up hope he would someday find truth, justice, and freedom. We expect that Marcus will be coming home soon, where his family and friends have been anxiously waiting for him for 13 years.

In the summer of 2021, Ohio Innocence Project fellows Correna Kuhl and Miranda Loesche discovered law enforcement had not turned over crucial evidence to the defense that indicated another person committed the murder. Correna currently works for Pinales Stachler as a law clerk where she was able to continue her pursuit of justice for Marcus.

Unbeknownst to Marcus, his lawyers, and the court, in 2010 the surviving victim of this heinous crime had identified another suspect just days after the home invasion murder. Marcus would not have been convicted and spent the last 13 years in prison if the police had complied with their obligations under the constitution and provided this critical exculpatory evidence to the defense before Marcus’ trial.

Judge Jody Luebbers, the original trial court judge, emphatically ruled from the bench on January 10, 2023, granting a new trial after learning what was hidden from the defense (and from herself) many years ago.

As argued in our motion for a new trial:

When evidence of the accused’s innocence is hidden by the state, our system of justice breaks down. The downstream effects of hiding such evidence include not only the wrongful convictions of the innocent, but also the continued freedom of the true perpetrators of what are often very serious crimes. New victims may suffer at the hands of the true perpetrators who are left free to continue their crimes without consequence. The consequences are diverted—away from those who deserve them—and into the laps of men like Marcus Sapp. Retribution inflicted on the wrong person is a unique injustice.

The rearrangement between accountability and guilt is often not random. There are perpetrators of the withholding of exculpatory evidence; there are non-passive violators of due process.  And there are victims aplenty when the state hides evidence of innocence, and then tells a false narrative at trial. Indeed, the members of the jury become victims of the state’s duplicity, as well as the trial court itself. Abstractly, the integrity of the justice system becomes a victim. The severe consequences, however, all remain at the feet of the wrongfully convicted men and women serving time in prison for crimes they did not commit. The time has come to send one of those men, Marcus Sapp, home.

It gives no pleasure to the undersigned counsel to bring this motion (and its disturbing allegations against the state) to the attention of this Court. Frankly, something terribly unjust occurred in front of this Court approximately twelve years ago, and it must now be rectified.  An innocent man—Marcus Sapp—was sentenced to prison for murder after the state withheld critical evidence indicative of Sapp’s innocence. To the extent this Court has memories of the facts of this case, perhaps the best approach may be to forget them as the real story was hidden from the Court back then anyway. To that end, Mr. Sapp, through counsel, respectfully requests this Court reexamine this case from scratch, this time with an eye toward the state’s misconduct that has now come to light, and which is detailed in the link below.