Martin Pinales recently returned from Myanmar where he was a speaker at MyJustice Making Access to Justice Sustainable in Myanmar (July 24-28, 2017) on the topic of “Training Trial Skills and Rule of Law.” He worked with approximately 148 lawyers from Myanmar to strengthen their legal skills and practice. 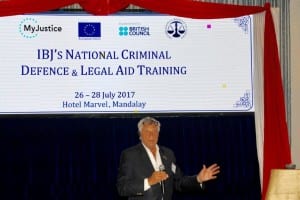 The program, sponsored by International Bridges to Justice, The European Union and the British Council, coincided with the opening of two new Justice Centers in Taunggyi and Mandalay on July 24th and 25th. The Centers will provide free legal representation, advice and assistance to the poor and create public awareness and understanding of rights and responsibilities under law. Previously, the government was run by a military dictatorship and the generals suppressed almost all dissent – symbolized by the 17-year house arrest of opposition leader Aung San Suu Kyi, who won the Nobel Peace Prize in 1991. Gross human rights abuses prompted international condemnation and sanctions. After the government changed hands in early 2016, the country began seeing a major shift and a gradual liberalization process. Lawyers in Myanmar are now learning a totally new legal system.

To learn more about this project, please visit http://www.myjusticemyanmar.org/