Pinales Stachler attorneys, Martin Pinales and Candace Crouse, are pleased to report that after years of litigation, the United States Court of Appeals for the Sixth Circuit agreed that the 2010 trial of their client, Russell Cletus Maricle, and seven co-defendants, was so fraught with error that it rendered their trial fundamentally unfair. Maricle’s 26-year prison sentence for racketeering, money laundering, and obstruction of justice was vacated and the case remanded for a new trial.  The Sixth Circuit held:

The government charged a RICO conspiracy lasting from 2002 to 2007. In its attempt to prove that defendants were part of an enterprise involved with vote buying, the government was permitted to present evidence of profuse drug dealing in the 1980s and 1990s in Clay County, even though there was no evidence that drug money was used to buy votes in the charged conspiracy. The district court also admitted evidence that witnesses had been intimidated, even though the government offered no evidence that defendants were involved with the intimidation. The erroneous admission of this evidence caused great prejudice to defendants. With regard to direct evidence, the district court made its first error by injecting itself into the fact-finding process by making unprompted, substantive changes to the government’s transcripts. These transcripts also contained glaring inaccuracies that should have been left untranscribed. Finally, the admission of hearsay accusations should have been excluded under Rule 403 because their probative value was exceptionally minimal in comparison to the danger of unfair prejudice. Given that the government was able to paint an unfair picture of defendants and offer direct prejudicial evidence that should have been excluded, we remand the case for a new trial.

We note that this conclusion is bolstered by several other factors. First, Jones’s and Thompson’s convictions for honest-services mail fraud (Counts 3, 5, 6, and 7) have been vacated by the district court because they did not involve a bribery or kickback scheme. Second, the district court granted post-trial motions for judgment of acquittal from Jones and Stivers, finding insufficient evidence to support their convictions of attempted extortion (Count 4). Third, the government concedes that defendants’ conspiracy to money launder (Count 2) and the related forfeiture count (Count 13) rest on an invalid theory and should be vacated, and we agree. Finally, the district court committed two additional errors: (1) the limitation of cross-examination of Mike Bishop and (2) the failure to instruct properly the jury regarding the testimony of Agents Sagrecy and Briggs. We address both errors below so that they may be corrected on remand; however, we need not determine whether either error constitutes plain error because remand is appropriate without these additional errors.

Martin Pinales and Candace Crouse specialize in federal white collar trials and appeals.  They can be reached at (513) 252-2750. 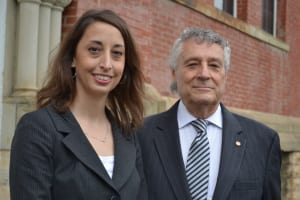